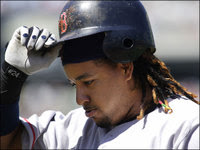 Okay, not to pile on the whole Red Sox-as-dynasty theme (although I hope it’s true) but here’s why I like this particular Soxian vintage.

First, they’re not all prepackaged and gee-swell-wholesome. Jonathan Papelbon has sported a world-class hangover since the clincher on Sunday. In fact, he apparently has lost the World Series Game Four game ball. These guys can not hold on to their championship mementos to save their lives.

Anyway, on Monday Papelbon, with his David Lynch hair, told a reporter at Fenway that he’d spent the night drinking and the morning puking. Maybe not a role-model, but definitely refreshing. And he’ll apparently say more of the same on Letterman tonight.

I was IM’g with a former co-worker who moved to the southwest. We had season’s bleacher tickets, back when they could be had for under $10 a game. For awhile, he jumped aboard the Diamondbacks bandwagon but recent Sox successes sucked him back into the vortex of the righteous. His take on Papelbon: “Ya gotta love him. I’d like to hang out with him—-for about six beers. Then, I want to leave before the fight starts."


The Sox parade on Tuesday was hilarious. At one point, Manny Ramirez appeared to be wearing not one, not two, but three hats. At the same time. And none appeared to fit.

That raises his chapeau quotient from the two he wears on field. Another friend, a Mariners fan no less, loves to watch Manny play left at Safeco Field. “I love it when he loses both hats on a play,” he writes.

We all have our hobbies.
Posted by barbarella at 6:02 PM No comments:

Turning the tables on PR spam

If you're a reporter or ever have been, you must love what Wired Editor Chris Anderson has done.

While i'm completely sympathetic, a buddy who left the profession a few years ago summed up his view about Mr. Long Tail's tactic:

"I feel privileged he even lets me read his blog."
Posted by barbarella at 5:59 PM No comments: 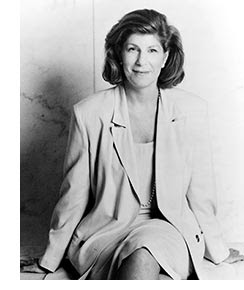 Why is it that NPR's Nina Totenberg feels compelled to read reams of "dialogue" verbatim from each Supreme Court case she covers?

Someone who's covered a beat as long as she has should be able to paraphrase the important stuff and quote judiciously just the "good bits."

If anyone wants to read a transcript they can do so. In print, extensive quote mongering is usually a sign the reporter isn't sure about what he or she is writing about.

What's her excuse?
Posted by barbarella at 2:15 PM No comments:

What do Yogi, Sinatra, Einstein and Streep have in common

New Jersey today announced a Hall of Fame of its very own.

Inductees range from Thomas Edison to Bruce Springsteen. And of course the Chairman of the Board. Also astronaut Buzz Aldrin and novelist Toni Morrison.

Which leads to the seminal question: who’s the ranking member—The Chairman or The Boss?
Posted by barbarella at 5:47 PM No comments:

No shortage of angst here 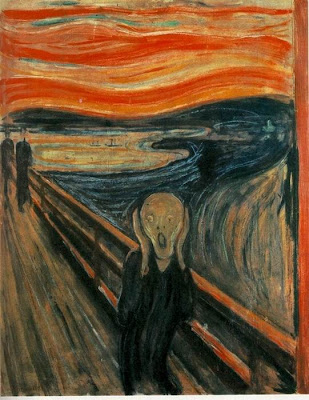 There’s been a lot of
jawing in the local media about how, since the Sox won it all in 2004, there’s a certain lack of say—-agita, neurosis, angst—in the general populace.

Short memories among those who just had to be talked off the ledge, Tobin Bridge, insert local-high-spot-here when Boston was down 3-1 to Cleveland. What was that—-a week ago?

For some, the fact that the Sox are up 2-0 in the World Series vs. an under-performing Rockies team stirs quite a bit of the “A” word. Folks who think the Rockies might just have us right where they want us.

This is not the heart of New England for nothing. Disaster lurks just beyond every victory and don’t you forget it.
Posted by barbarella at 11:17 AM No comments:

Not a good sign for game one Sox v. Rox

This is NOT a good omen.

The morons at the local Fox affiliate actually had John Kerry on to wish the Red Sox luck. This is convincing evidence that the only broadcast group more inept and obnoxious than the Fox national sports on-air team is the local Fox morons. Including Maria and what's his name. They are unwatchable.

Stay tuned. I hear Fox has lined up Michael Dukakis to drive his tank to the mound for the first pitch.

P.S. Note to Senator Kerry: John--Why the long face?
Posted by barbarella at 4:34 PM No comments:

This is the mystery man

The non-demonstrative guy behind home plate is Jeremy Kapstein, a senior advisor to the top Red Sox cheese. And apparently the prototype for Jerry McGuire.

You know he had to be a big deal given his box-seat real estate. But, seriously, could he look a little bit happy about it???
Posted by barbarella at 7:19 PM No comments:

Toldja there'd be more on this

Here's the inevitable David Copperfield-show-goes-poof story.
Posted by barbarella at 7:08 PM No comments: 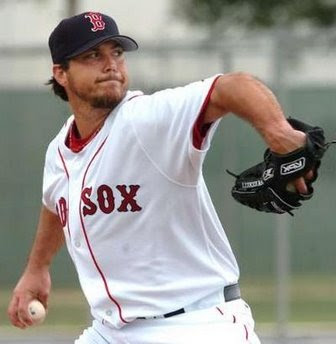 Story here.
Posted by barbarella at 7:54 AM No comments:

At last a Web community I can get behind

It’s true I don’t have the bandwidth to track the idiocy that emanates from Tim McCarver’s mouth. Thankfully, a little googling shows there’s an army of like-minded citizens out there.

The orange-headed freak accounts for four of the 35 stupidest-ever sports quotes as compiled here. As one respondent said, he surely deserves more.

These are my new peeps.
Posted by barbarella at 7:16 PM 1 comment:

This was a kind of fun ComputerWorld assignment on “funky” data centers. But not nearly as fun as some of the resulting
Slashdot comments. Check out Blakey Rats in particular.
Posted by barbarella at 7:20 PM No comments:

Maybe someone out there knows what this means.

In tonight's Fox broadcast of game 3 Sox-Indians, Tim McCarver and Joe Buck were nattering on about Victor Martinez' likes and dislikes. Apparently, Kansas City is his favorite road town and Curb Your Enthusiasm his favorite show, said Young Joe Buck.

To which McCarver rejoins: "There are four Venezuelans on this team and his favorite show stars Larry David."

What the heck is he trying to say here?

Anyone?
Posted by barbarella at 4:45 PM 4 comments:

Thoughts from Sox vs. Indians, game one

First: Who’s the dude behind home plate, with the dark jacket? A buddy in Seattle who watches most games has been obsessing about this all season. The guy shows no emotion. Typically wears a dark jacket, white shirt. No emotion. No chit chat. He’s over the right hand batter’s shoulder each at bat. My buddy think's he's an alien.

Second: What’s with Asdrubal Cabrera’s pearls? At first I thought they were a bit much, then I remembered: It’s a night game. (Ed. note: Here's the answer.)

Third: I take back nearly everything bad I said about Bobby Kielty, who started in right over new-fan-fave Jacoby Ellsbury (who has played center and left but not right) and fan goat J.D. (aka Nancy) Drew. Kielty tonight proved he can still hit Sabathia, which was why he was called.

Fourth: Note Manny’s errant dreadlock. Looks like it’s signaling a left turn. Actually not a bad idea, when you remember this is Manny we're talking about. It's not a given he'd take a left at first.

Fifth: It’s the seventh inning, Sox are up 10-2. One is tempted to chalk this one up as a "W." Until Paul calls from the road en route to the Pats game in Texas and reminds: “Just remember. Gagne’s sitting in the pen, waiting. Tick, tick, tick.”

Question for you: When is it appropriate to say a team has broken a game open? Sportscasters in recent memory have said the Sox have broken one open when they get a five run lead. Umm, I don't know about you, but seems to me plenty of teams have resurged against bigger leads than that.

Case in point, that Friday night Yanks-Sox game in September. On second thought, forget about it. I'm still trying to.
Posted by barbarella at 7:00 PM No comments:

A friend clued me in to the Uncov site a couple months ago. It is, in short, brilliant

Now someone has taken the time to interview the brains of the operation here.

Here’s a money quote from the Wired interview.

“You know you're a bullshit company when your core technology is Ajax. If the business is every widget under the sun conglomerated into this giant application, there's no real technology there. There's no noteworthy computer-science problem being solved. The Ajax stuff is pre-written. You just have to go to the libraries and put it all together.

When Gmail came out -- and Gmail is a pretty kick-ass product -- it was like, "Ha! Ajax for dynamic web apps! We can use it for everything!" So now you have companies like Zoho, for example. Their sole goal is to take every desktop app that ever existed and reimplement it in Ajax with no added features or functionality. It irritates me as an engineer that companies with no engineering merit, first off, are getting funded and, second off, are getting bought out.“

My hero.
Posted by barbarella at 7:51 AM No comments:

Tony Gwynn tonight commented on an onfield meeting of Yankee and Indians managers with the umpires: The Yankees were claiming catcher's interference in a Hideki Matsui at bat.

Gywnn brightly suggested that "One of those guys [the managers] is going to end up upset."


Someone should tell these on-air guys that they don't have to fill every silence. In fact, on-air silence (plus the roar of the crowd, etc.) can make the best broadcast.

Or, the classic: "How much do you love these fans?"

Come on people. Just because you can say it, doesn't mean you should say it.


On the plus side, TBS' coverage has been mercifully free of the hideous, epilepsy-inducing graphics that make Fox telecasts unwatchable. The graphics and that orange-headed, pun-spouting freak Tim McCarver.
Posted by barbarella at 8:27 PM No comments:

More notes from the ALDS

How about a voice transplant for Tony Gwynn?
Posted by barbarella at 5:39 PM No comments:

Bye Bye Roger (if only it'll take this time)

I wish people would stop with the public discussion of whether last night’s so-so performance was perhaps, might be, kinda, sorta could be Roger Clemens swan song at Yankee Stadium. Or professional baseball. Or whatever.

That guy has retired more times than Frank Sinatra, so enough already.

That man’s best work in years is in that cell phone commercial
Posted by barbarella at 4:57 PM No comments:

Watching my twin obsessions this week—-the Red Sox clinching the AL East and PBS’s “The War” (Feel free to insert Boston/Cambridge axis jokes here) it struck me that a lot of people’s hairdos are frozen in time.

Exhibit A: Dennis Eckersley, former Oakland As relief ace and Sox player-turned-commentator. Theguy's a great analyst, with the perfect mix of expertise and fan-like wonder. Exhibit B: The War’s Ken Burns. Both are 40-something guys with 25-year- old mops.


To paraphrase Peyton Manning: “They’ve been working those ‘dos since the fifth grade.”

Pot/kettle disclaimer, the same could be said for me.
Posted by barbarella at 8:29 PM 1 comment: